This crazy vehicle 911 GT3 RS promises to push customers to new extremes on the road and track and has more in common with race cars than anything else on the market. There is no luggage space in the new Porsche 911 GT3 RS. 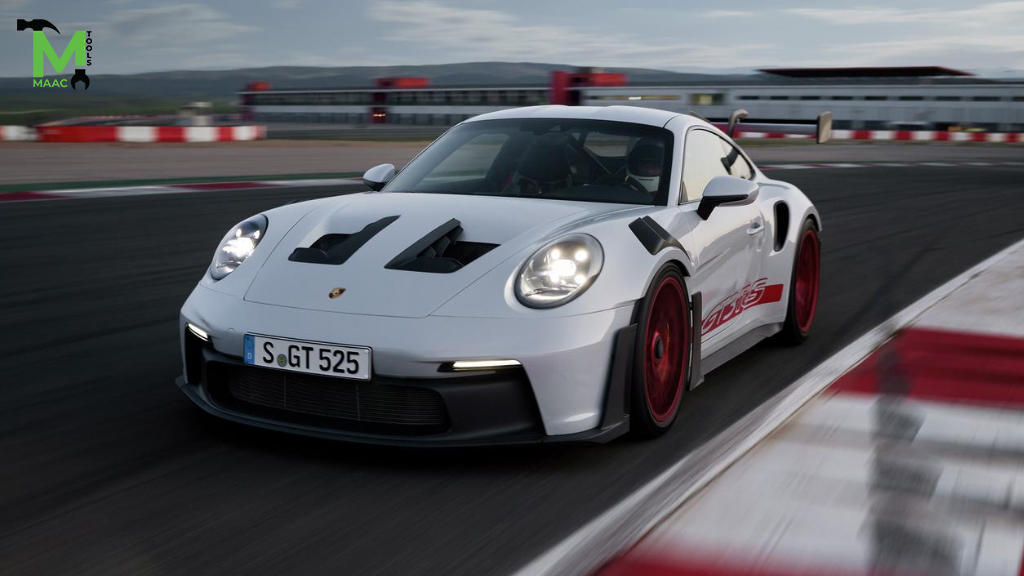 Instead, a huge radiator takes up all of the space behind the front bumper, adopting a style from renowned race cars. The space behind the carbon fiber seats with the six-point racing harnesses is occupied by the race-spec roll cage, leaving little room behind them.

Since the Porsche 911 GTS RS engine is located where most cars have a boot, it goes without saying that you cannot place baggage there. And this is the Porsche that has been designed with the greatest degree of concentration. 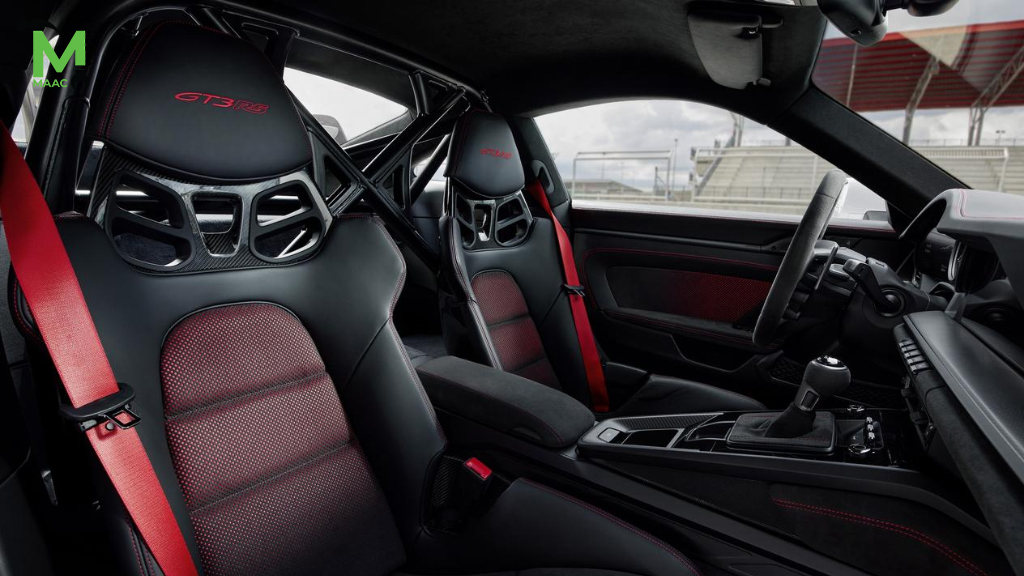 Look at the size of the wing. It’s ridiculous

It is the first Porsche with a rear wing lifted into the air stream for maximum effectiveness, standing higher than the roof.

For maximum speed on long straightaways, the gigantic rear wing features a Formula 1-style drag reduction system, as well as active aero components on the bonnet that can fold flat for straight-line driving.
When optimum braking performance is required, both components adjust their angles of attack. 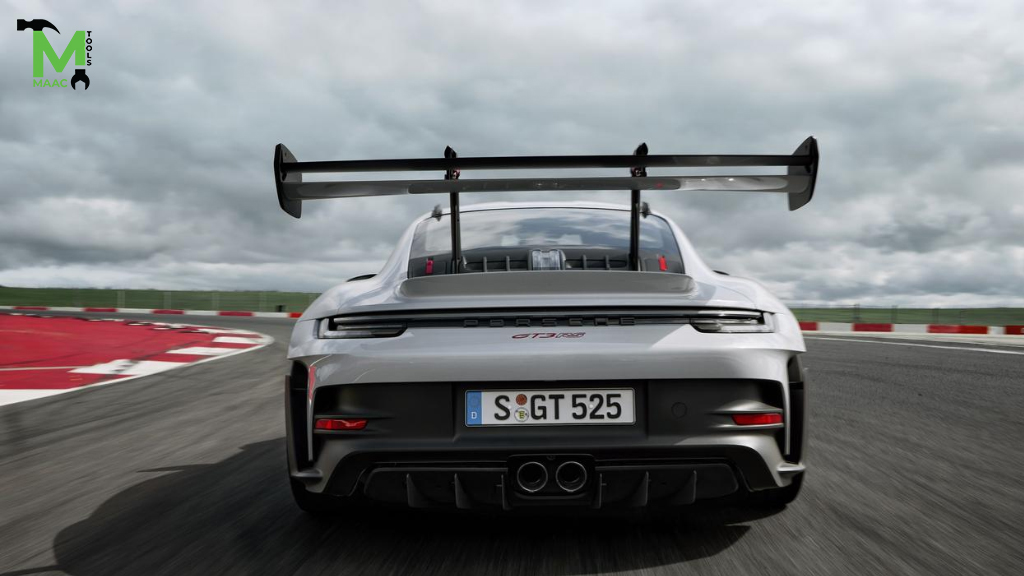 Aero components can be found practically anywhere. The louvered front guards drive air out of the tyre arches, while the front bumper acts as a splitter to create downforce. Huge cutouts behind the front and rear wheels regulate airflow from the tyres, while a rear diffuser pulls air from beneath the vehicle.

Some of it had been seen previously 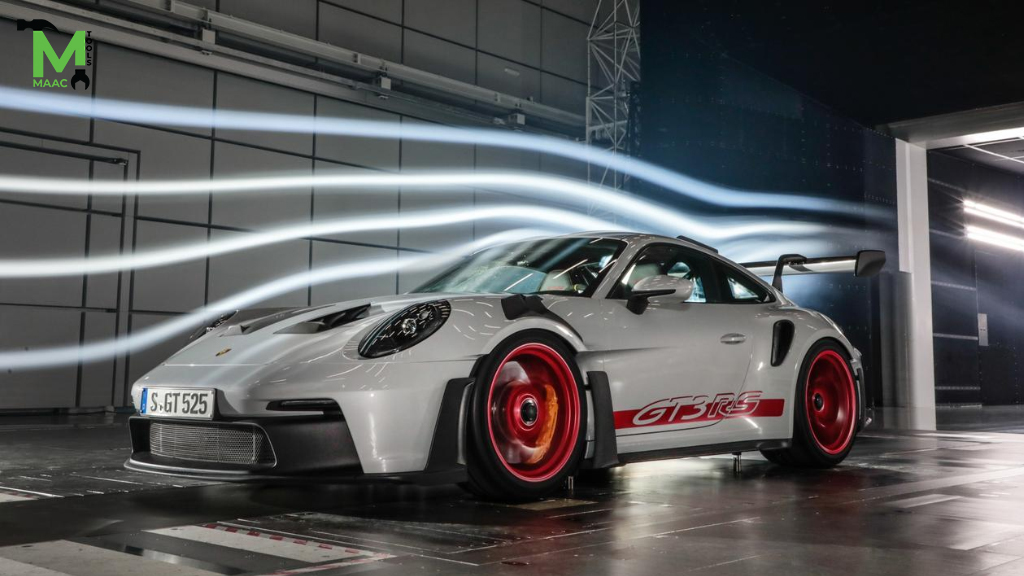 However, the new GT3 RS goes a step further, adding 40 kilos of downforce at high speed with suspension wishbones inspired by F1 racing and resembling an airplane wing’s cross-section.

The engine can breathe cooler air because roof-mounted fins direct hot radiator air away from the intake at the base of the rear window.

The end result is a vehicle that produces three times as much downforce as the most recent Porsche 911 GT3 or twice as much as the Lamborghini Huracan STO, the two vehicles with the highest track focus currently available. 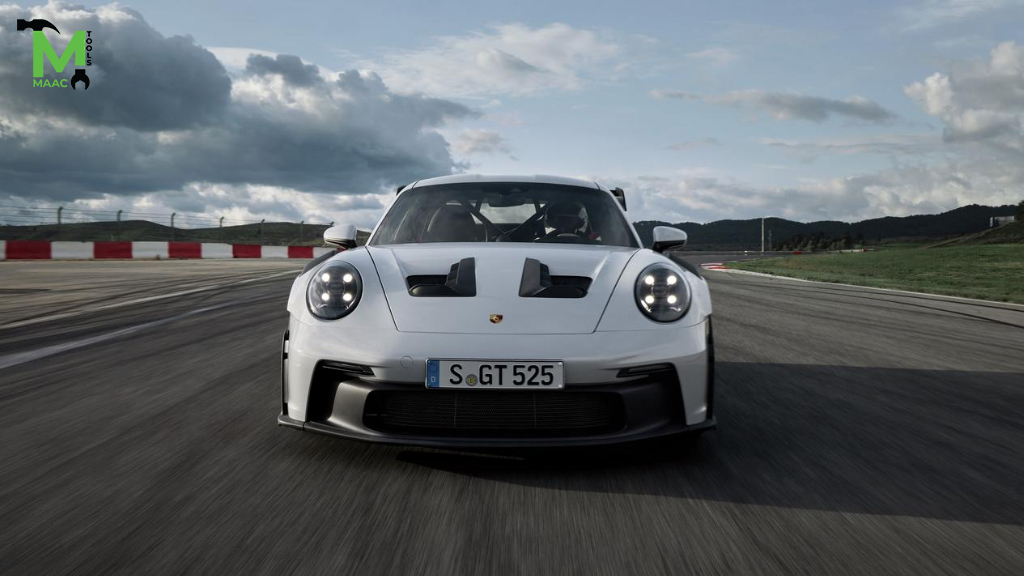 For the right price, you can have the Porsche in any color – even brown with gold wheels

The automobile produces 860 kilos of downforce, according to Porsche, at a speed of 285 kilometers per hour.

Because of this, the car’s highest speed, which is 296 km/h, is rather standard in the world of supercars. Track enthusiasts won’t care, however, as they are aware that the car has much more potential than the majority of currently available machines. any track day, or even.

Without exceeding 300 km/h, Porsche’s 911GT3 RS race cars have won significant endurance competitions at Bathurst, Daytona, the Nurburgring, and Le Mans. Despite being at least 20 km/h slower than the top speed reached by V8 touring cars, the racing 911 GT3R is much faster than a Supercar around Bathurst, thanks in large part to downforce. 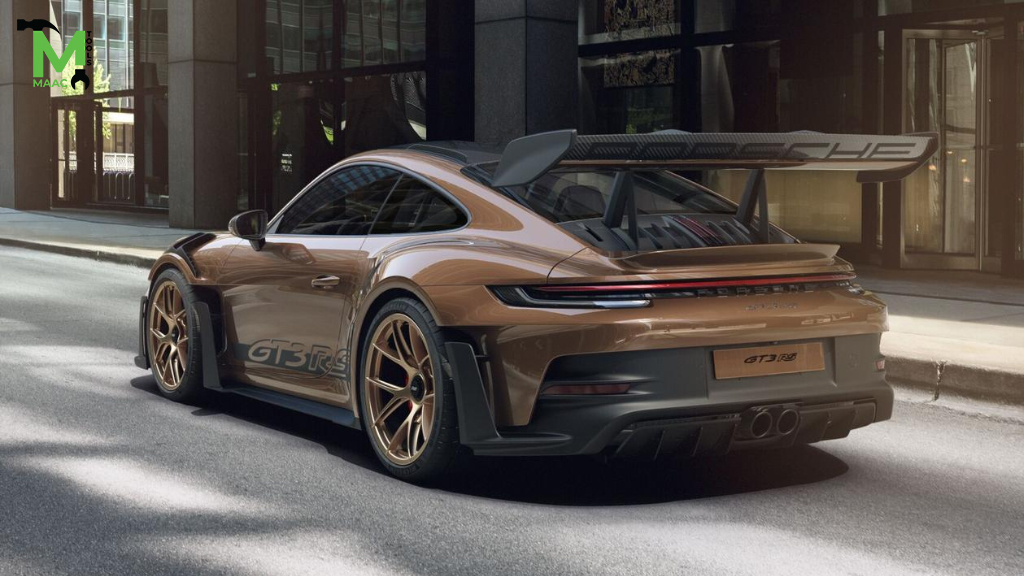 Because of the severe aerodynamic impact, Porsche had to alter the suspension angles of the car to lessen its propensity to nosedive under hard braking. It features the same kind of flat and sturdy suspension platform found on exotic racing cars.

That implies that the pavement will be very firm.

The car also features center-lock wheels that can be ordered in magnesium, huge steel brakes that can be switched out for ceramic rotors upon request, steel roll bars that can be replaced with a new carbon fiber roll cage, and extensive use of lightweight materials. 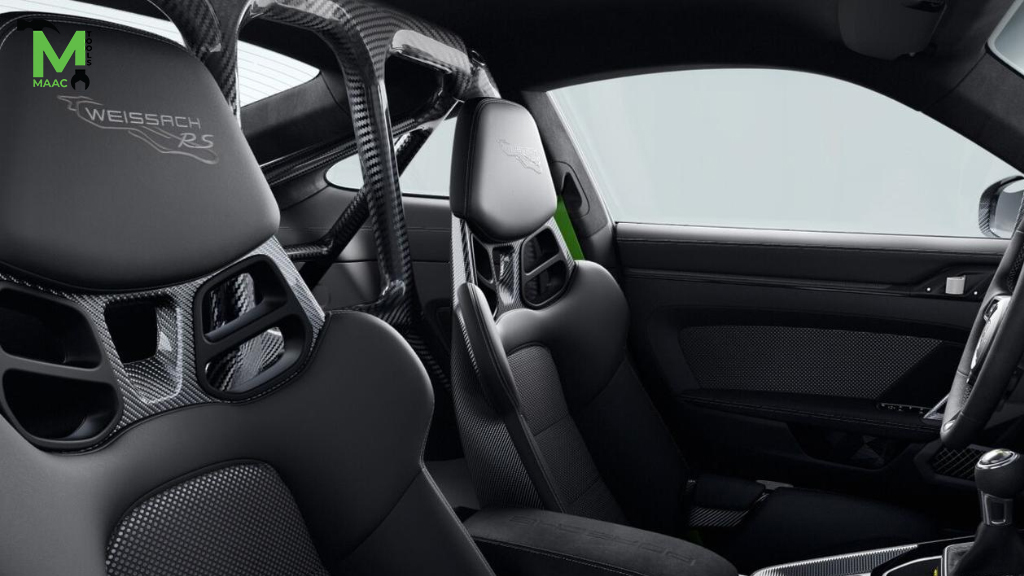 The DRS button is on the left side of the steering wheel, right next to the volume knob 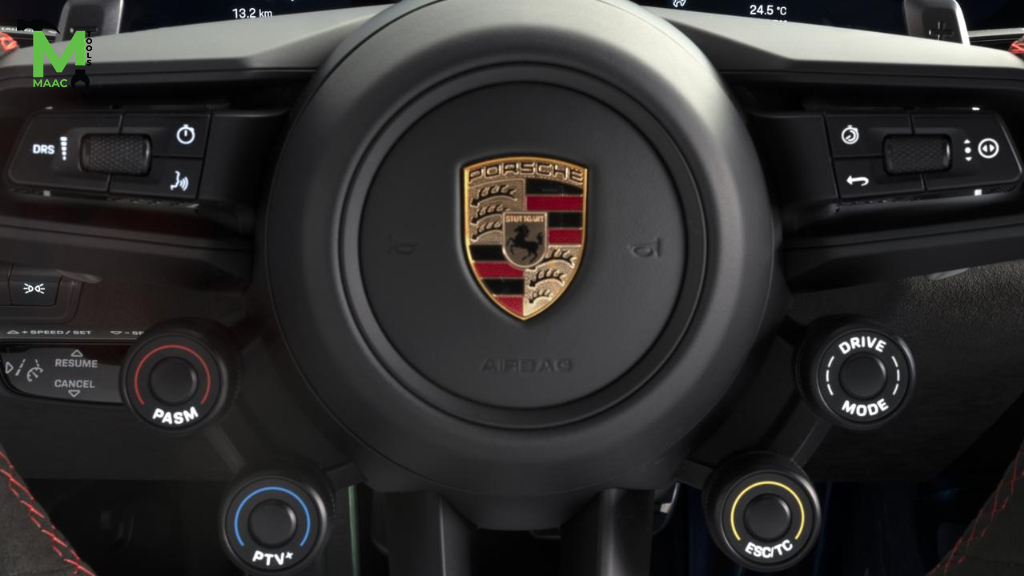 The ‘Weissach’ pack brings lighter wheels, a carbon bonnet, and a different suspension 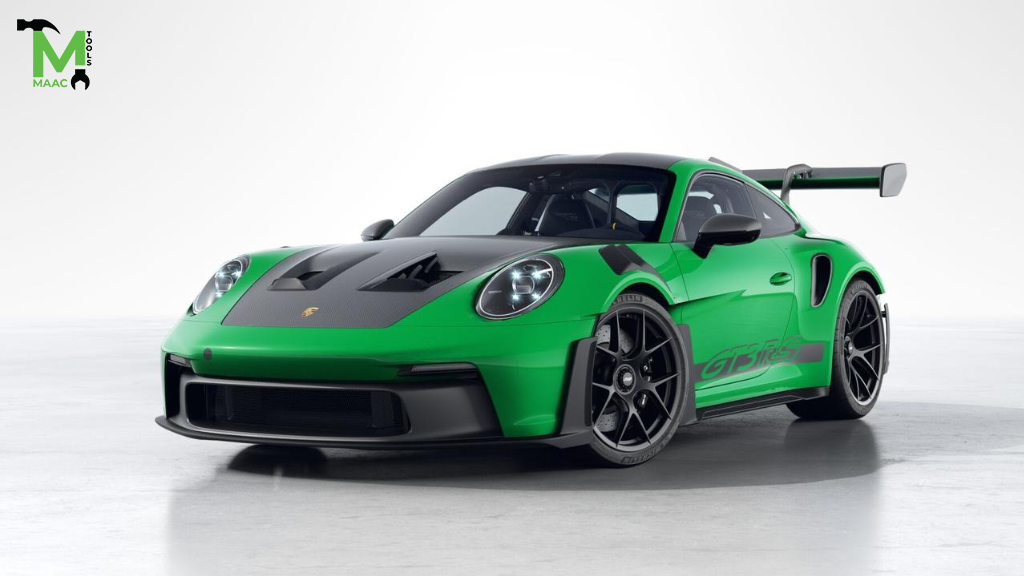 Apple Security Issues in Australia - How to Protect Your Device